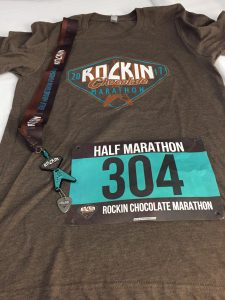 With just over 1000 runners the Rockin’ Chocolate marathon kicked off the racing season.  As the sun came up over Madison, Wisconsin on Saturday September 2, 2017, the temperature a cool 48 degrees; made for a brisk race day start.  After a long summer training in the Florida heat and humidity I was ready for a refreshing race.   The longest run I ran since June’s Rock ‘n’ Roll San Diego half marathon was eight miles, after tackling sciatica inflammation for three weeks I was anxious to get back into racing.

I love the Midwest and this was my first visit to Wisconsin, which is surprising because my husband and kids are big Packers fans.  This small inaugural race intrigued me, who doesn’t like rockin’ roll and chocolate?  My race partner (husband) found this race on the internet as we were looking for a race on the same weekend the Green Bay Packers played.  It so happened the last pre-season game was that weekend, we signed up for the race and also bought tickets to a Thursday night game.  A Green Bay Packers game had been a bucket list item for the last 50 years!  I digress, back to the race.

The smiles and warmth greeted us to the Rockin’ Chocolate event.  Packet pick up was a small affair and located in the community center near the start/finish line.  Ample parking, quick easy in and out in less than a few minutes. A few booths but none that caught my eye.   I’m hoping next year this event gets bigger and the packet pick-up is an expo with sponsors, stores, and fun festivities.  After packet pick up I was ready for my pre-run late lunch, Chick-Fil-A four-piece chicken strips and a small chocolate milk shake to load up on calories to help carry me across the finish line. 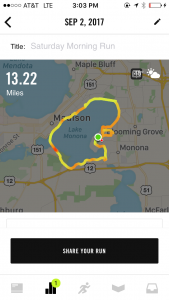 After a great night sleep at the Holiday Inn express only minutes from the event I found parking plentiful next to the library and across from the community center.  We arrived 45 mins to start time, but next year this event may want to make sure there is more parking as spaces filled up quick about 7 am.  Parking close to the finish line is important to me.  Nothing worse than having to walk more than a mile to get back to the car after a half marathon.  An easy walk toward the starting line and bathrooms for the last minute stop before the race. Bathrooms were also plentiful as porta potties, and bathrooms were open in both community center and at the pool.  Bathrooms wer very clean and only waited in line less than five minutes.

The start was well organized with a 7:30am start and on time!  Most events I’ve participated in start late. The bell rung and the crowd glided past the start line on their way around Lake Monona.  I followed the crowd, but knew to slow it down the first few miles to conserve energy for a strong finish.  I seem to want to start out like gang busters because of the excitement of the early crowd, then tire around mile 9 or 10. And knowing I hadn’t run a long run since June I needed to settle the pace down.  The pleasant cool air helped get the blood pumping in my legs as I rounded the first 3 easy miles.

The views around Lake Monona and neighborhoods were beautiful and peaceful.  A slice of running heaven.  I enjoyed the well stocked water and Gatorade stops every two miles.  It helped pass the miles.  Even though the course was stunning, I thought it was advertised as a flat course.  In some spots, it seemed hilly and challenging, I’m glad I practice the bridges in South Florida.  The mile markers for both the half and full marathon were clearly marked, color coded, and visible, with plenty of support on the course directing runners.  I particularly enjoyed the stop at mile 9 where all kinds of refueling goodies, cookies, banana’s, and other snacks were provided.  Other races only provide goo and I’m not a big goo fan.

The last 3 miles I slowed down and it seemed quiet. The course wasn’t all that scenic any more.   All I thought about was the finish line.  When I first heard about the Rockin’ Chocolate event I thought bands would rock at most mile markers to keep runners motivated, and the only music was between mile 4 and 5 where a lady played harmonica.  I was also disappointed with the lack of neighborhood cheering, spectators with signs to uplift and motivate.   I didn’t see but less than a handful of neighbors sitting out cheering as we ran through their neighborhood.  The lack of entertainment on the course and lack of cheers from spectators was disappointing.

The finish line festivities and food consisted of animal crackers and banana’s, I didn’t see any bagels unless I missed it, and chocolate milk.   I always love when events have chocolate milk at the end!  Chocolate milk is great for replenishing and easy on the stomach.  The medal was beautifully designed and it wasn’t so heavy I couldn’t wear it back to the car without it weighing me down.  This event was great for the first year of running, it was well organized and managed.  I believe Wisconsin people are some of the most down to earth and friendly people, plus it’s right in the heartland of the country.  This is one race I see growing over time and I would sign up and run again!